These dry aged steaks with creamy bleu cheese sauce and crunchy fried shallot rings makes for a hearty meal.  For an extra touch, you can serve the steaks along side of you your favorite potato dish and a crisp green salad.

Add shallots to a small bowl, cover with milk and allow to soak for about 30 minutes. In another small dish, mix together flour and cornstarch. Working in batches, using a fork, dredge the shallot rings in the flour mixture, coating evenly. Put battered rings aside on a plate. In a shallow skillet, heat oil to 350 º F.

Again working in batches, fry battered shallots until golden brown and crisp. Drain on paper towels. Season with coarse salt and set aside.

In a small bowl, fold together blue cheese crumbles and cream. Season with pepper. Refrigerate until needed.

Heat grill to medium-high or heat coals in a charcoal grill until they glow bright orange and ash over.  Lightly oil hot grates.

Let steaks stand at room temperature for about 20 minutes. Season both sides of each steak with coarse salt and freshly cracked black pepper.

Grill steaks for about 6 minutes on the first side, rotating 90 degrees at the halfway mark to create cross-hatch grill marks, if desired. Using tongs, flip each steak to the other side and grill for another 6 minutes, or until desired doneness. We suggest medium-rare, which would register 125 º F on an instant-read thermometer.

Let steaks rest for 8 -10 minutes before serving, each with a generous spoon of blue cheese sauce. Top with crispy shallots. 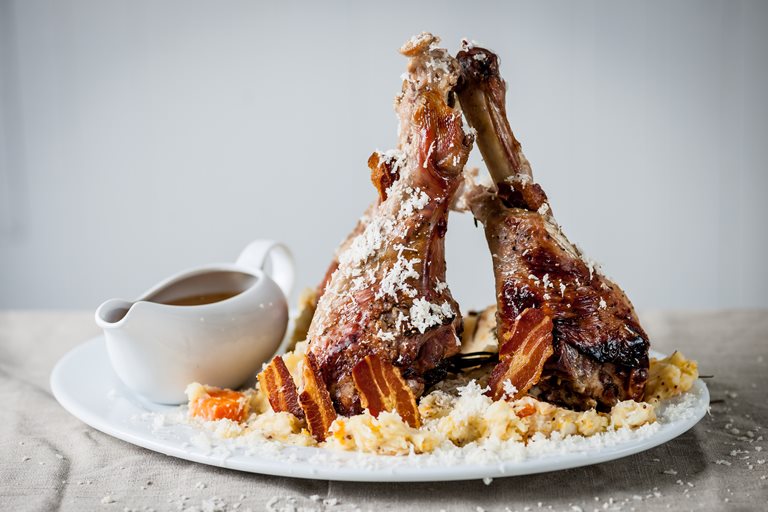 Served up as a large dish to share, this edible mountain made up of turkey legs, pancetta and a root vegetable mash  will bring a sense of adventure to your dinner table. This imaginative recipe makes a delicious centrepiece for a Christmas dinner.

For Serving:
2-3 cauliflower florets
2 slices of pancetta or bacon

For the turkey, place the onions, carrots, celery, garlic and herbs in a deep roasting tray.

Combine the chicken stock and apple juice in a pan and bring to the boil.

Season the drumsticks with salt and pepper and place them on top of the vegetables and herbs and pour in the hot stock, ensuring half of the turkey drumsticks are submerged and the other half are exposed. Cover with foil and place in the oven for 40 minutes.Remove from the oven, take off the foil and turn the drumsticks over. Return to the oven, uncovered, for 50 minutes to 1 hour – until the meat is cooked and tender and the exposed part of the turkey drumstick is nicely browned

Meanwhile, lay each slice of pancetta down on a baking tray lined with parchment paper. Place another piece of baking parchment on top, followed by a tray to press down – this will stay on top during the cooking to prevent the pancetta from curling while cooking. Place in the same oven as the turkey for 20-25 minutes until golden and crispy.

For the root vegetable mash, place the potatoes, carrots and parsnips in a saucepan and cover with cold water

Bring to a gentle boil and cook until tender, approximately 10-15 minutes. Drain in a colander and allow to steam for 5 minutes.

Return to the pan and place over a low heat, adding the butter, milk, mustard, salt and pepper. Once combined, remove from the heat and mash as desired

By this time the turkey should almost be ready. Remove the pan from the oven and take the drumsticks out of the liquid and place on some kitchen towel to absorb excess moisture. Reserve the liquid.

To serve, spoon the mash across the center of a large dish or serving platter.

Using a pair of tongs, arrange the turkey drumsticks onto the mash with the small ends sticking up and meeting in the middle to form the peak of the mountain. Garnish with the crispy pancetta.

Using a fine grater or micro-plane, grate the cauliflower over the final dish to make ‘snow’ and serve with the braising liquid as gravy, on the side in a gravy boat.

America owes it’s tradition of the Thanksgiving feast to a man named Tisquantum (c. 1585?- 1622), more commonly known as Squanto. He was a member of the Patuxet tribe and is best known for being an early liaison between the native populations in Southern New England and the Mayflower Pilgrims. As a child, Squanto was been kidnapped by an English sea captain named Thomas Hunt and was sold into slavery in the city of Málaga, Spain. Squanto was among a number of captives bought by local monks who focused on their education and evangelization, and as a result, he learned to speak Spanish, French and English.

Málaga in 1572, forty years before Squanto was delivered there in slavery.

Squanto eventually traveled to England and from there returned to North America in 1619, only to find that his village and tribe had been wiped out by an epidemic infection, making Squanto the last of the Patuxet.

When the Mayflower landed in 1620, Squanto was one of the first Native Americans the members of the Plymouth colony encountered. As a diplomat, he worked to broker peaceable relations between the Pilgrims and the Wampanoag. He played a key role in the early meetings in March 1621, partly because he spoke English. He then lived with the Pilgrims for two years, acting as a translator, guide, and advisor. During this time, he also saved the colony from starvation by teaching the settlers how to sow, plant and fertilize native crops—including corn and squash, which proved vital since the seeds which the Pilgrims had brought from England largely failed. He also taught the settlers how to fish and how to tap maple trees for their sweet sap.

Because of Squanto’s central role in the survival of the Plymouth colony, a feast was held to commemorate the event. It was referred to at the time as “The Harvest Celebration of 1621” and is considered to be the first Thanksgiving that took place in the colony. From historical journals, the menu at the first Thanksgiving celebration between the Pilgrims and the Wampanoag consisted of wild game that included venison, goose, duck, pigeon, and turkey, seafood such as mussels, clams, oysters, lobsters, bass, and eels. A combination of wild and cultivated crops including chestnuts, walnuts, squash, beans, and dishes made from dried corn was also been served.

Remove the turkey from the packaging and rinse under cold water.

Place the turkey on a rack in its roasting pan and prepare the brine.

For the brine, combine the salt, sugar, bay leaves, pepper rosemary, thyme, sage marjoram with 2 1/2 gallons water in a large 4 to 6 gallon container or cooler large enough to hold turkey comfortably. Stir until salt and sugar dissolve. Place the turkey in brining solution and refrigerate or ice overnight.

The following day, prepare to cook the turkey.

Remove the turkey from brining solution; drain well and pat very dry with clean paper towels. Discard brine. Set the turkey, breast side up, on a roasting rack set into a large roasting pan. Season with salt and pepper, then fill the cavity with onion, celery, carrots and lemon. Fold wings under the bird. Truss the turkey up by the legs using kitchen twine. Roast the turkey for 35 minutes, basting with butter every 10 minutes.

Reduce the oven temperature to 350 o F and roast approximately 3 hours more, basting bird every 30 minutes with drippings and butter. If the breast of the turkey is browning to quickly , tent the bird with aluminum foil , until and continue to cook until an instant-read thermometer inserted into the thickest part of the thigh without touching bone registers 165 o F.

Remove the turkey from the oven and allow to rest for 30 minutes. Meanwhile, Pour the pan drippings into a large Pyrex measuring cup and allow to it stand to allow the fat to rise to top.

Meanwhile, make a gravy from the pan drippings.

Discarding any solid vegetables used in roasting the main meat dish, pour the pan juices into a glass measuring cup and let stand for 10 minutes. Skim off any fat that forms on the surface. Heat a cast iron skillet over high heat and pour in the fat/grease free pan juices, then the chicken stock.

Bring to a boil, stirring with a wooden spoon until smooth. Pour into a gravy boat.