Reservations are scarce, restaurants are crowded, and the weather can be frightful this time of year — so why brave the Valentine’s Day scramble for a restaurant reservation when you can go to the best restaurant of all: The one in your kitchen. You don’t need to make a reservation, you get to call the shots on the lighting, the music — and most importantly — the menu.

The secret to this menu is fresh, top-quality ingredients simply and deliciously. All you will need to do is a quick shop and do it early in the day if you can, then get out some candles and cue your favorite music for an intimate meal you can have ready in under an hour.

Plus, the act of preparing a meal for, or maybe even with, someone can be a romantic gesture. So, yes, a Valentine’s Day date night at home can be special, memorable, romantic — and delicious. Here’s our ultimate Valentine’s Day dinner menu that feels just as special as a table at a fine dining restaurant, minus the whole going-out hassle and it will leave you plenty of time for relaxed, indulgent dining.

Start with an appetizer of sweet, briny, velvety oysters: They are  the classic aphrodisiac for lovers and a great at-home treat. You can shuck them yourself — just watch this how-to video.

Serving them can be as simple as placing some lemon wedges and a small bowl of cocktail sauce on the side, or try an easy topping like chimichurri, a fresh, herbal sauce that is an unexpectedly delicious topping for oysters; try this recipe for a simple mild chimichurri sauce with chopped bacon and finely diced jalapeño, a pleasure for bacon lovers.

Oysters can also be served with sriracha and lime, a modern riff on the spicy-tangy combo. Also, a  Classic mignonette sauce, a sophisticated pairing of red-wine vinegar and shallots that’s so easy to make. They will be absolutely delicious.

There’s nothing quite like sharing tender, succulent lobster with someone you love. Wild-caught lobster tails are a fantastic way to indulge,

with minimal prep and mess (no bibs required!). Steamed lobster is a classic and tops for enjoying the pure taste of the luscious tail meat. Or you can roast the tails with a flavorful herb topping; this easy recipe shows you how.

You will want one or two tails per person, and have extra lemon slices and melted butter on the side, plus some flaky seas salt and cracked pepper — simplicity rules.

Twice-baked New Potatoes
Baking these creamy, fluffy potatoes twice — once to cook the potato, and again to crisp up the topping — gives a special occasion­–worthy upgrade to an otherwise everyday side dish. The technique results in a much more striking visual presentation than standard mashed potato fare, without being too labor-intensive or tedious. Add an extra-special touch of decadence by topping with chives and caviar.

Lemony Asparagus Spears
With their juicy stalks and slightly crispy ends, oven-roasted asparagus make a perfect counterpart to a fancy entrée like steak and lobster. Plus, it’s delicious enough to stand on its own without taking over the plate. Steam the spears or blanch them in lightly salted water, and they’ll be ready in minutes; cook them just until they turn bright green and the stalks just turn tender. Drizzle them with a little fresh lemon juice for a subtle pop of acidity and sprinkle of salt and pepper that takes this takes this side dish to the next level. For the roasted version on this dish click on the link here. 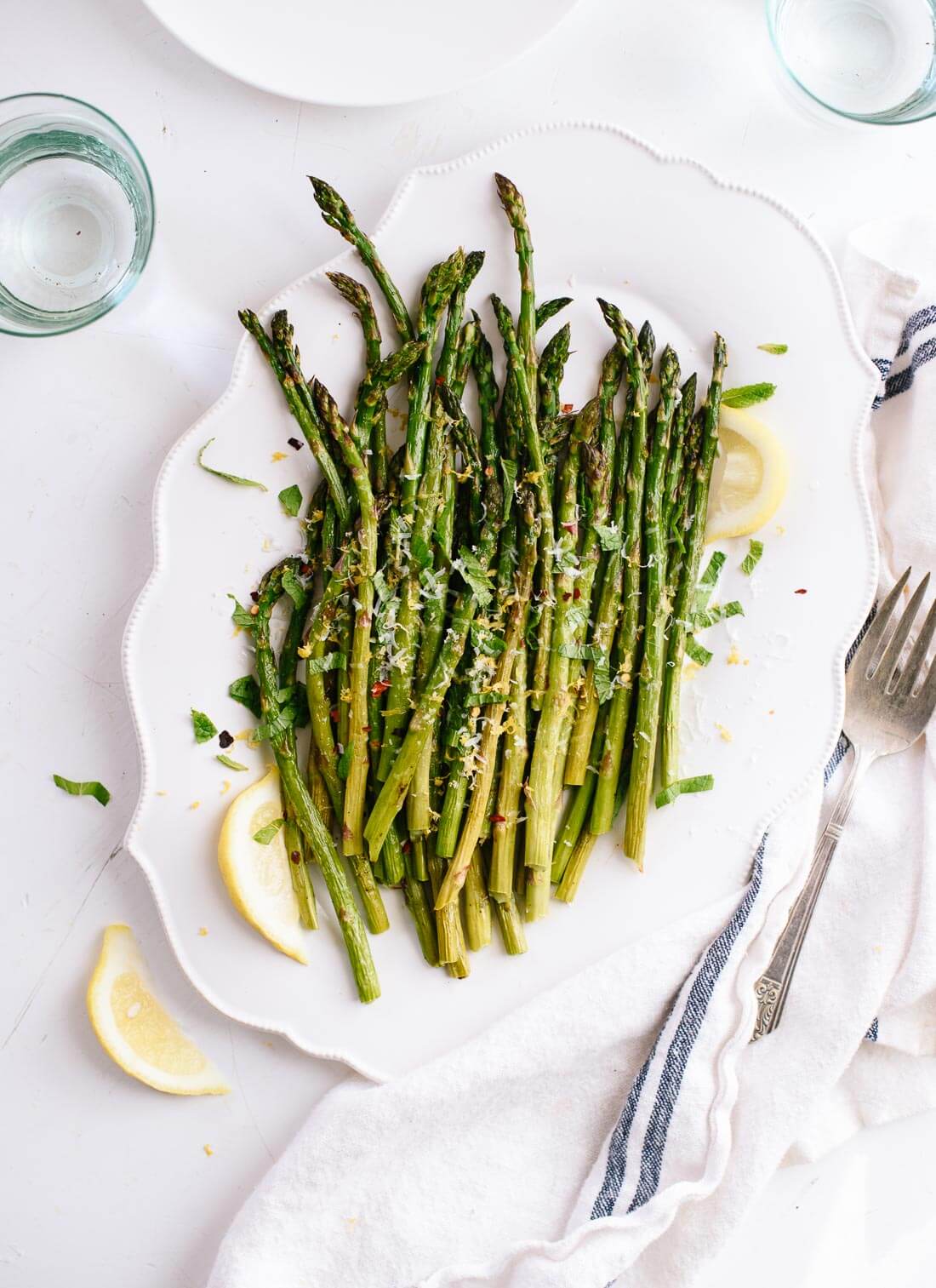 Don’t Forget the Bubbly
For the requisite champagne, fill your flutes with Jacques Bardelot Brut, a crisp, dry French  Champagne with clean and balanced flavors that will complement, rather than overpower, the meal. Not a fan of bubbly? Consider the wine pairing or H&G Howell Mountain Cabernet Sauvignon with the ribeye.

Another suggestion is a sparkling wine: Toad Hollow Risque French Sparkling Wine,  which is a fruity sparkling wine with a natural delicate sweetness.

And in serving champagne or wine at at home with your special dinner has another benefit to staying in: no corkage fee!

This is a very typical dessert served in Spain on special occasions and during the holidays. It is a favorite among home cooks, mainly due to its ease of preparation and simplicity of ingredients that can found in the pantry.

In addition there are many different varieties of pears, being available in your local markets throughout the year. Note that the winter pears are thicker with a rough skin that is golden yellow with brown flecks in color. They also tend to be more aromatic and acidic flavor and the texture of the pulp tend to be grainy. To make this dessert, the best pears are bell-shaped, such as the Bartlett variety that is tender and juicy, or the Abate Fetel that is found in Spain and Italy.

A favorite native variety of Italy that was bred by a group of monks in the 15th century, the Abate Fetel pear is a very special delicacy. Tall and slim with an attractive yellowish brown russet over green exterior, it has a rich sweet taste that is much more pronounced than the more common Anjou and Bartlett varieties. Usually eaten when just barely soft, the Abate Fetel pear has a slightly crisp yet melting texture. It is excellent for baking as well as eating out of hand.Usually available from Argentina between April and May, always choose fruit that is hard to firm with no external stem punctures or bruising. Keep refrigerated as Abate pears will ripen very quickly at room temperature.

In keeping with tradition a red wine  from the Ribeira Sacra region of Spain is a favorite wine to use in this dish. Ribeira Sacra DO (Denominación de Origen) is a winegrowing zone at the heart of Galicia, north-western Spain. Its boundaries are marked roughly by the Mino and Sil rivers, both of which flow down from the Cantabrian Mountains en route to the Atlantic Ocean.

Thousands of years before the lucrative global wine economy of today, Romans carved terraces on slopes in Ribeira Sacra that rose at precipitous angles from the rivers below. They planted vines to keep themselves supplied with wine. Over the centuries, monks expanded and maintained the network of vines during the Middle Ages, which was farmed by the church and by locals, for whom grapes were just one of many subsistence crops.The name Ribeira Sacra means ‘Sacred Shore,’ which most likely references the numerous monasteries in the area.

The landscape of the region is dotted with Romanesque architecture, and the steep slopes and canyons overlooking the two rivers are dominated by beautiful banked terrace vineyards. Here, gradients can reach up to 85 percent, making vineyard work laborious or heroica (heroic), as it is known locally. The Ribeira Sacra area, which today covers around 1200 ha (2965 acres), was accorded DO status in 1996.

Unlike most Spanish reds, these are cool-climate wines, defined as much by the

rainy, temperate Atlantic coast as the soils, the slopes and the people who farm them. The reds are made predominantly of the mencía grape, which is also the basis for the reds of the Bierzo region to the east. But where the Bierzo wines tend to be denser and burlier, the best reds of Ribeira Sacra epitomize juicy freshness. These are lively, graceful wines, with the same sort of aromatic loveliness and lissome body that draws people to Burgundy and Barolo.

Ribeira Sacra excels at making wines, like the  the 2012 mencía from Algueira, which is spicy and wild, with a slatelike minerality. At $16, it the best value for a good quality of wine for this Spanish wine.

Pears poached in wine takes full advantage of any left over wine that is far too precious to pour down the drain. The fruit absorbs alcohol in the wine and the sugars produce a homogeneous taste and are intertwined most deliciously. When you eat the poached pears your palate will convince you that you are are drinking wine, and when you taste the syrup, you will taste the very essence of the fruit, itself. This dessert is simply divine and you must try it.

Directions:
Boil over high heat the wine sugar, peppercorns, cloves,lemon peels, orange peel and the cinnamon stick in 1/2 cup water in a large pot for about 5 minutes, stirring occasionally to dissolve the sugar. Reduce heat to medium-low and cook slowly for about 2 minutes until the mixture is slightly reduced.

Add the pears and simmer for about 15 minutes until they are tender and a knife can slide easily in the Center. The pears should take on the dark deep rich re color of the wine. Using a slotted spoon, remove the pears in a large bowl and set aside.

Remove and discard the cloves, peppercorns, lemon peels, orange peel and cinnamon stick. Continue cooking the liquid over a medium-low heat, for about 30 minutes until the liquid has the consistency of a thick syrup.

Return the pears to the liquid and spoon the syrup over the pears, coating completely with the syrup hot for 1 minute. Stir in the vanilla extract and turn off heat.

To serve the dessert, place pear halves in the center of each plate Drizzle with 2 tablespoons of syrup and garnish with just a pinch of nutmeg.

Cook’s Notes:
This dessert can be eaten warm or cold according to taste, but the most typical way is to eat them are at room temperature, once they have cooled in the refrigerator. The syrup is gently re-heated and served over the fruit

Another option is to make several vertical cuts and presented as if it were a half-open ladies fan. An ideal garnish is a dollop whipped cream or a scoop of vanilla ice cream on the side, with a drizzle of the syrup.

Easter Sunday Dinner was a simple affair this year. Normally I would have three different proteins: a fish, a rack of lamb, and Cornish Hens and lots of side dishes and at least two desserts.

This year I opted for a more simpler menu,  by serving an appetizer,  a spiral honey baked ham with a few side dishes, and a cake for dessert.

We started off the meal with an appetizer of Pickled Beet Deviled Eggs.

A  simple salad with sliced pickled baby beets, baby arugula and cherry tomatoes was dressed in a lemony vinaigrette.

The great thing about a simple menu means that you spend less time in the kitchen and more time sharing stories and fond memories in the making with your family and friends at the dinner table.