Creole restaurants. This dish was created in New Orleans by Chef Paul Blange in the early days of Brennan’s in the French Quarter during the early 1950s and was a well-established local favorite when the Delmonico re-opened. The recipe is very similar to Chicken Clemenceau, but without the inclusion of green peas. The name Pontalba denotes richness, as the dish is named for  Micaela Leonarda Antonia Almonester y Rojas, Baroness de Pontalba (1795- 1874) who was a wealthy New Orleans-born aristocrat, businesswoman, and real estate developer, and one of the most dynamic personalities of that city’s history.

As  the wealthiest woman in New Orleans she built the opulent Pontalba buildings in 1848, that still flank Jackson Square in the historic French Quarter. The construction of the Pontalba Buildings cost more than $300,000  and she was a constant visitor to the construction sites, often supervising the work on horseback.

The cast-ironwork decorating the balconies were also her personal design and she had her initials “AP” carved into the center of each section. Considered the oldest apartments in

the country, the buildings continue to house elegant residences upstairs and fine retail shops downstairs. The Baroness was also instrumental in the name change of Place d’Armes to Jackson Square; as well as the decision to convert it from a parade ground to a formal garden. It was alleged that when she was landscaping the garden, she threatened the mayor with a shotgun after he tried to prevent her from tearing down two rows of trees.

She also helped finance the bronze equestrian statue of Andrew Jackson which features prominently in the square.Legend has it that her friend Andrew Jackson, once failed to raise his hat to the Baroness, so when she funded the statue baring his likeness she insisted that sculptor Clark Mills depict Jackson forever raising his hat toward her apartment building. Probably not true, but it is a great  story.

The Baroness  was also known to give  lavish parties and served rich creative Creole dishes to her guests during these affairs. And in that same  spirit , what could be any more different than the simple ingredients of cooked chicken napped with Bearnaise sauce all on a bed of deep fried potatoes, diced ham, mushrooms, onions, garlic and white wine? Chicken Pontalba, of course, which is a rich and lavish dish that is truly Creole in creation  and meant to be enjoyed as fine  dining. 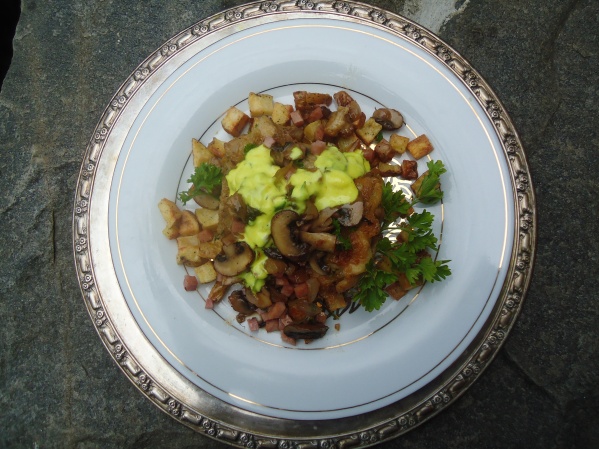 For the Bearnaise Sauce , click here for the recipe

Toss the Potatoes in 2 tablespoons vegetable oil and season liberally with kosher salt and black pepper. Layer on a baking sheet and bake for 40 minutes or until golden and crispy.

In the meantime, season the flour with salt, black pepper, and cayenne. Season the thighs also, then dredge pieces in the flour.

When the potatoes are almost ready, heat 2 tablespoons butter and 1 tablespoon vegetable oil in a saute pan. When the fat is hot, brown the chicken quickly on both sides, place on a ovenproof dish and finish in the oven.

In the same saute pan, add the ham and onions, saute until golden brown and the onions are tender. Add the mushrooms, garlic, and a tablespoon more butter. Saute for 2 to 3 minutes. Deglaze the pan with the wine, and cook until the alcohol evaporates.

Fold in the brabant potatoes from the oven and 1 tablespoon of the parsley, taste for seasonings. Just before serving, incorporate the last tablespoon of butter.

Split the potato mixture between two heated plates. Top each with a chicken thigh, and finish with a generous drizzle of Bearnaise sauce. Garnish with minced parsley.