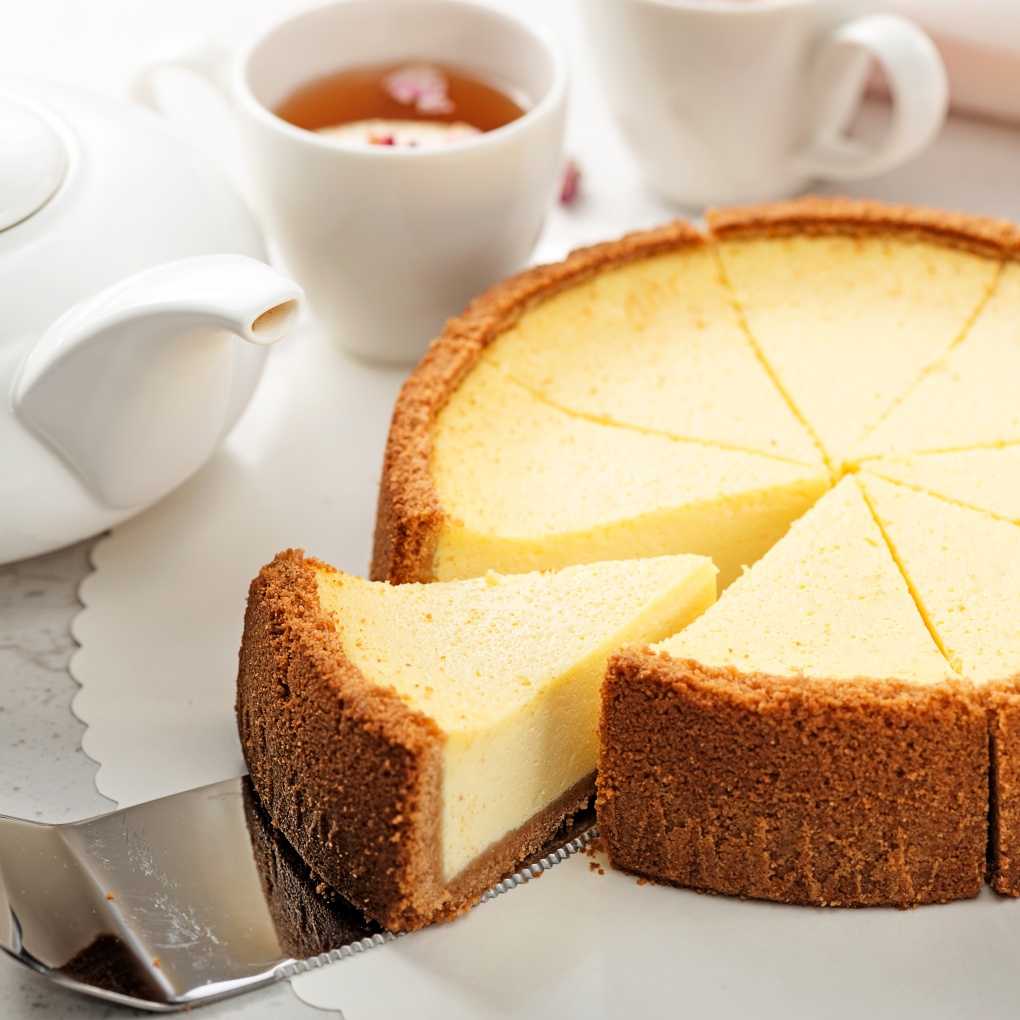 This month, we a continuing to showcase the food of New York with this recipe for New York Style Cheesecake.

Contrary to popular belief, the first “cheese cake” may have been created 4,000 years ago on the Greek island of Samos and not in New York City. In Greece, cheesecake was considered to be a good source of energy, and there is evidence that it was served to athletes during the first Olympic games in 776 B.C. Greek brides and grooms were also known to use cheesecake as a wedding cake. When the Romans conquered Greece circa 146 B.C., the cheesecake recipe was just one spoil of war. They added their own spin on the recipe including crushed cheese and eggs. The Romans called their cheese cake “libuma” and they served it on special occasions. Marcus Cato (234 – 139 B.C,), a Roman politician in the first century BC, is credited as recording the oldest known Roman cheesecake recipe. The writer Athenaeus is credited for writing the only known surviving Greek recipe for cheesecake in 230 A.D.

As the Romans expanded their empire, they brought cheesecake recipes to Europe around 1000 AD. Great Britain and Eastern Europe began experimenting with ways to put their own unique spin on cheesecake. Cheesecakes were also flourishing throughout Scandinavia and northwestern Europe.

In Europe, the recipes started taking on different cultural shapes, using ingredients native to each region. A cookbook entitled “A Propre new booke of Cokery” (1545) was printed in London during the Renaissance and it described cheesecake as a flour-based sweet food.

It was not until the 18th century, however, that cheesecake would start to look like something we recognize in the United States today. In the 18th century, Europeans began to use beaten eggs instead of yeast to make their breads and cakes rise. Removing the overpowering yeast flavor made cheesecake taste more like a dessert treat. When Europeans immigrated to America, some brought their cheesecake recipes along.

Many foods that Americans have come to regard as uniquely “American”, are Jewish originating from the Ashkenazi. Because of the Jewish dietary restrictions (Kashruth), the restriction on serving meat and dairy products at the same meal gave rise to a set of traditional dairy dishes including blintzes, cheesecake, and noodle pudding. The concept of delicatessens also came to the United States in the mid-19th century with a new influx of European immigrants.

In 1888, Katz’s Deli was the first Jewish American delicatessen to open in New York City. The popularity of delicatessens that specialized in kosher food spread throughout American culture with the help of the Ashkenazi. As delicatessens began to spring up in many Jewish communities they locally became known as “delis” as they proved even popular with the general public. 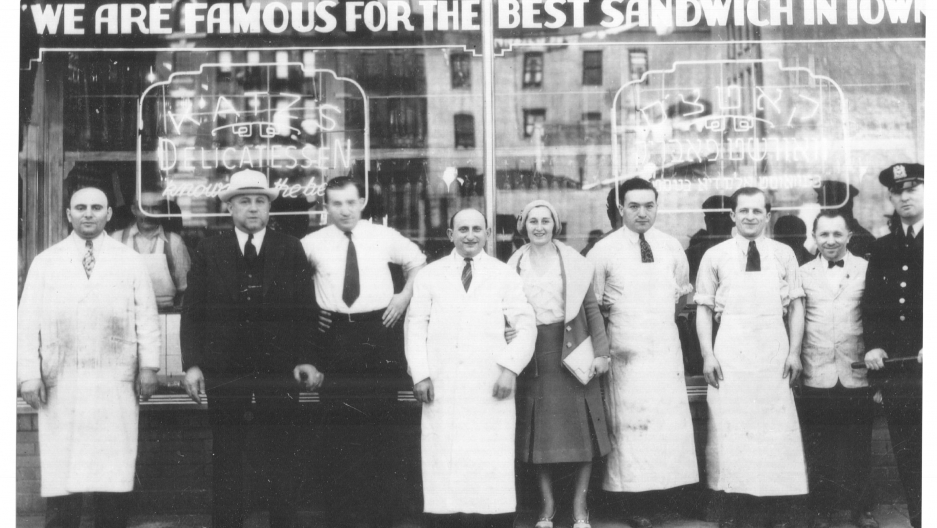 Cream cheese was an American addition to the cake, and it has since become

a staple ingredient in the United States. It was invented in 1872 by American dairyman William Lawrence of Chester, New York, who accidentally developed a method of producing cream cheese while trying to reproduce a French cheese called Neufchatel. In 1880 Lawrence started distributing his cream cheese in foil wrappers under the name of the Empire Cheese Co. of South Edmeston, New York, where he manufactured the product. He called his cheese Philadelphia Brand Cream Cheese, now a famous trademark. Lawrence adopted ‘Philadelphia’  as the brand name, after the city that was considered at the time to be the home of top quality food, including ice cream….but that is another story for another time.

In 1903, the Phoenix Cheese Co. of New York bought the business and with it the Philadelphia trademark. The brand was bought by the Kraft Cheese Co. in 1928. Kraft Foods still owns and produces Philadelphia Cream Cheese today.James L. Kraft invented pasteurized cheese in 1912, which led to the development of pasteurized Philadelphia Brand cream cheese. It is now the most popular cheese used for making cheesecake today.

By the 1900s, New Yorkers were in love with cheesecake. Nearly every restaurant had its own version of the dessert on their menus. 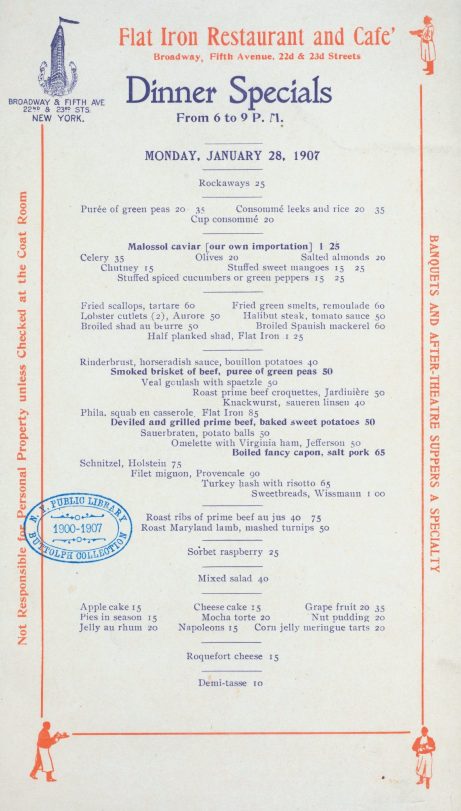 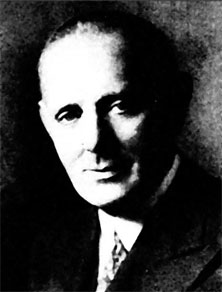 By the 1920s, the deli became a celebrated gathering place in Jewish and American life and the signature sandwiches were a standard. Sandwiches like the overstuffed pastrami or corned beef on rye was popular choice in Jewish American delicatessens — becoming a hallmark of an iconic New York institution. Even though he is best known for his resturants and signature sandwiches, Jewish-German immigrant Arnold Reuben (1883-1970) is generally credited for creating the New York Style cheesecake in 1929. The story goes that Reuben was invited to a dinner party where the hostess served a cheese pie. Allegedly, he was so intrigued by this dish that he experimented with the recipe until he developed the beloved New York Style cheesecake. New Yorkers have vied for bragging rights for having the original recipe ever since.

As all food lovers know, New York is not the only place in America that puts its own spin on cheesecakes. In Chicago, sour cream is added to the recipe to keep it creamy. Meanwhile, Philadelphia cheesecake is known for being lighter and creamier than New York style cheesecake and it can be served with fruit or chocolate toppings. In St. Louis, they enjoy a gooey butter cake, which has an additional layer of cake topping on the cheesecake filling. Even around the  World, every country  has its own take on the best way to make the dessert. For example, the Italians use ricotta cheese, while the Greeks use mizithra or feta. Germans prefer cottage cheese, while the Japanese use a combination of cornstarch and egg whites. There are specialty cheesecakes that include blue cheese, seafood, spicy chilies and even tofu! In spite of all the variations, the popular dessert’s main ingredients – cheese, wheat and a sweetener –remain the same.

No matter how you slice it, cheesecake is truly a dessert that has stood the test of time. From its earliest recorded beginnings on Samos over 4,000 years ago to its current iconic status around the world this creamy cake remains a favorite for sweet tooths of all ages.

To make the crust: In a large bowl, add the crumbs, sugar and melted butter. Blend until a sandy texture is achieved.

Evenly spoon the crumb mixture into a 9-inch springform pan, halfway up, pressing down the sides and bottom firmly making the crust adhere to the pan.

Increase the mixer speed to medium and beat in the remaining sugar, then the vanilla. Blend in the eggs, one at a time, beating well after each. Beat in the cream just until completely blended.

Gently pour the filling into the prepared crust.

Prepare a ban-marie (water bath). Place the cake pan in a large shallow pan containing hot water that comes approximately 1 inch up the side of the springform pan.

Bake until the edge is light golden brown, the top is light gold, and the center barely jiggles, about 1 1/4 hours.

Remove the cheesecake from the water bath and transfer to a wire rack, and let cool for 2 hours undisturbed. While remaining in the springfrom pan, cover the cheesecake with plastic wrap and refrigerate overnight, for 24 hours.

On the following day, remove the cheesecake from the refrigerator and unmold from the springform pan. Serve chilled or at room temperature, garnished with fruit if desired.

Cook’s Notes:
In slicing the cheesecake, use a sharp straight-edge knife, not a serrated one, to get a clean cut. Be sure to rinse the knife with warm water between slices. Refrigerate any leftover cake, tightly covered, and enjoy within 2 days, or wrap and freeze it  for up to 1 month.